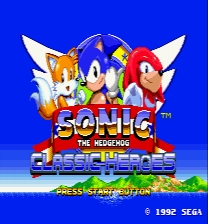 Sonic the Hedgehog Classic HeroesRead Me