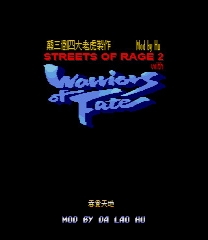 SOR2 - Warriors of FateRead Me

Homing Attack and Jumpdash in Sonic 2