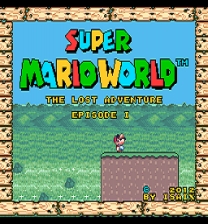 Super Mario World: The Lost Adventure - Episode I Read Me