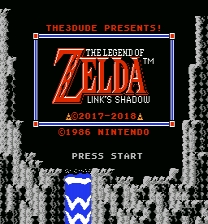 The Legend of Zelda - Link's ShadowDescription

The Legend of Zelda - Link's ShadowRead Me