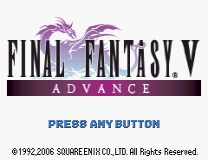 Final Fantasy V - Sound restoration and no framerate dropRead Me